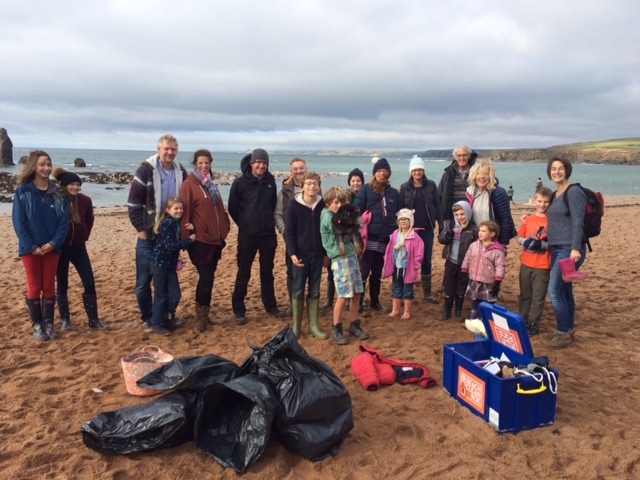 Last Saturday Less Plastic teamed up with Surfers Against Sewage and lots of willing volunteers to clean one of our nearby beaches, South Milton Sands in South Devon.

This stunning beach is a favourite among locals, with its long stretch of golden sand, grassy dunes, iconic arch-shaped Thurlestone Rock, and wetlands teaming with wildlife.

Yet despite its natural beauty, each tide brings a fresh batch of ocean plastic that it leaves on the shoreline as a stark reminder that plastic in the ocean never really goes away.

The waves and sunlight eventually break it down into tiny toxic pieces that are eaten by fish, and then enter our food chain.

In the meantime, ocean plastic entangles and chokes birds and marine wildlife, and causes them to starve when they mistake it for food.

Did you know that 70% of our oxygen comes from the ocean?

Looking after the health of the ocean ecosystem is critical for our survival as well as for the animals and fish that inhabit it.

One of the most effective ways we can keep plastic out of the ocean is by picking up litter from our beaches.

Low-tech clean-up efforts on land and along the coast have been proven to be the most impactful way to deal with ocean plastic to date.

A recent study found that 80% of ocean plastic either starts out as beach litter, or is carried downstream from towns and cities to the coast. Only 20% comes from marine sources such as discarded fishing equipment or cargo ships.

The coastline is also where the greatest diversity of species and largest numbers of birds, marine wildlife and fish live.

This means that if we collect litter from our coastlines before it has the chance to harm marine wildlife, and before it is swept further out to sea, we can make a huge difference to the impact of plastic in the ocean.

During our beach clean we found…
plastic bottles, plastic bags, coffee cup lids, crisps and sweet packets, straws, polystyrene packaging, cotton bud sticks, disposable cutlery, fishing rope, a tyre, a long stretch of rubber belting, a disposable barbeque, and hundreds of small multi-coloured plastic pieces.
This picture is just a sample of what we picked up.

Whilst this is depressing, it does highlight how the future extent of plastic pollution is very much in our hands.

We all have the power to tackle plastic pollution by avoiding single-use plastic wherever possible, and choosing reusable alternatives instead.

What else can we do to reduce plastic pollution in the ocean?

We’d like to thank everyone who came along to our beach clean and made it such a fun and productive morning. Thanks also to the Beach house for generously giving free teas and coffees to all our volunteers 🙂

However, you can make a positive impact by doing your own mini beach clean anytime, no matter how big or small. Every piece of plastic picked up is one less that can harm marine wildlife.

Likewise, every time you refuse single-use is one less piece of plastic added to the waste stream.